This is really an amazing video featuring Yanis Marshall and group dancing on “Wannabe” song by Spice Girls. Spice Girls were a British pop girl group formed in 1994. There are five girls in this group and this song was released in 1996. This song became very popular in more than 30 countries. 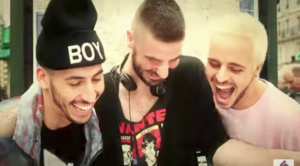 This video is directed by Fernando De Azevedo Feat Arnaud Boursain, Mehdi Mamine and Yanis Marshall himself. This time in this video Yanis Marshall and his group members are dancing on the song “Wannabe”. They danced so beautifully just like girls. He lives in France and at the age of just 24, he is very popular in France and is one of the best hopes of Dance in France. Yanis is wearing heels and dances very beautifully. He is one of the few men in France to dance in heels and he gives classed as well. He is very ambitious young dancer and makes his own decisions about his career and life. He has posted so many video on YouTube and very famous on internet with millions of views on his each video. His other two group members are also wearing heels. If you notice in this video his group members lose balance while walking like girls but Yanis does it so professionally. They shot the video at different locations in Paris and wear different clothes for each shot. There is very interesting scene in this video when Yanis comes in dogs outfit. He is laying on the ground along with another dog and it looks very funny and beautiful at the same time. They dance in the street as well and bystanders watch them dancing.

This video was filmed in Paris, on June 2012. In the end Yanis copies a dog sitting just next to him on the ground. Yanis is very handsome young man with short golden hair. Dancing in heels is not an easy job, sometimes even it is very difficult to walk but these guys performed so well in hells, they have done a great job.

Thanks for watching this amazing video and i hope you like it and i suggest you not to try dance while wearing heels, it is not an easy job. It can harm your feet.