This is very funny video to make you guys laugh. A lady and a boy plan to fool people by asking them to hold the boy’s ice cream cone while he ties his shoelaces and then suddenly a frog placed in the toy display sticks his tongue out and grabs that ice cream cone right out of their hands. In the beginning they show that how they are going to do this. 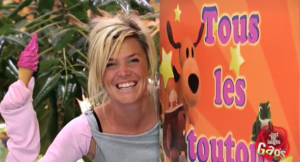 The cute boy is holding a ice cream come in his left hand and you can see a green frog in toy display just next to that boy, then suddenly toy frog sticks his tongue out and grabs that ice cream cone than from the other side a lady comes out from behind the painted box wall and shows that ice cream cone holding in her right hand and she smiles.So actually, that is lady’s arm which acts as frog’s tongue and there is a hole into that box wall, the lady sticks her arm out through. Then they begin the show, there is an another lady who asks people to look after that boy just for a moment as she needs to go to the shop right in front of them, then a lady agrees to do that and the boy asks that lady to hold his ice cream cone for a while as he points towards his lace that he needs to tie it, now the lady behind the wall acts and grabs ice cream cone right out of her hand and she makes a noise like the frog is actually eating it. The lady was surprised by this action. They repeat this action with other people as well. You can see one lady with her children and when frog grabs ice cream cone right out of her hand then she gets scared. The expressions of all people were amazing. They could not understand that what has happened there and where the ice cream cone has gone.Even an old man was shocked when cone was grabbed out of his hands.

Then that boy asks people to put their hands into the mouth of that toy frog and get his ice cream back, when people do that then on the other side that lady holds their hands and everyone gets scared, they feel like that frog is chewing their hands. They shout and pull their hands back out of the mouth of that frog. The reactions of a Chinese lady and another lady are really priceless. They are totally scared and shouting aloud. In the end the lady in blue dress is also shouting but then she smiles after realizing that it is a toy frog. I am sure that you will enjoy this video a lot and would love to watch it again and again.

Thank you so much for spending your time to watch this funny “The hungry frog” video and i hope you like it.