If you are a great fan of music then you will definitely love this video. Joe Rinaudo is blessed with great talent. He gives an amazing performance on American fotoplayer, an unusual musical instrument ever discovered. This fotoplayer instrument was developed by American Photo Player company between the years of 1912 and 1925. 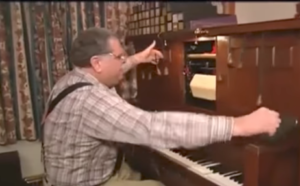 This large machine was used to play music and create sound effects for the silent movies and this is where Disney got his music from in early times. Many small instruments were fitted in this large machine to create sounds to narrate the action of any silent film. Fotoplayer came in several models and in this video Joe is playing the smaller one. It was first created in 1910 in Auckland. It consist of a player piano with two tracker bar spool boxes in which two rolls are queued up. One of those is used to queue up the music for the next scene of the film. That is the way to match the music with the actions in the film. The reason of using piano rolls instead of playing piano with hands is that it makes easy for the artist to reach to other things attached to this machine to produced different sound effects such as push buttons to activate the sound effects, pulling cords, paddles, buttons and knobs. All hanging pulling cords produce different sound effects as you can hear and watch in this video. Pulling cords produce sounds of train, a bell, Howard effect, symbol effects, base drum, tom tom for Indian music and gun shots. A horn is attached on this machine which is used in automobile vehicles. An electric horn is also attached to it. A call bell, telephone bell and door bell is also fitted on this instrument. The paddles fitted on this machine can produce sound like police siren, snare drum, machine gun shots and some other sounds as well. This is an amazing instrument and it requires lots of practice to operate it. The tabs are used to produce sounds like flute, violin and tuba. There is a tab working as principle sound which could be played with flute and tuba to make the sound louder. So overall this is very interesting and unusual instrument and Joe is one of the very few artists who could play this large machine.

45 hundred fotoplayers were made at that time and few of those still survive. These fotoplayers are replaced by other modern musical instruments. I believe most of us have not seen any of the fotoplayers.

Thanks for watching this video and i hope you like it and the unusual instrument played in this video by Joe Rinaudo.